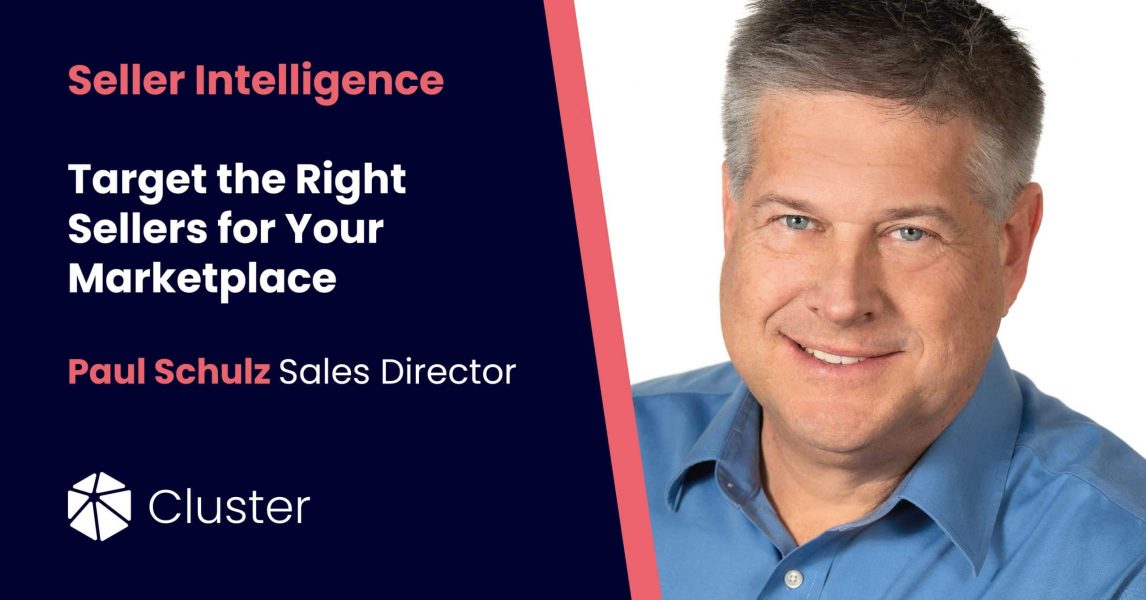 Seller Intelligence: Target the Right Sellers for Your Marketplace

On December 8, 2021, during a live webinar, we dove into the most popular ways our team works with major marketplaces, starting with the importance of catalog integrity as the foundation of any marketplace business, leading into insights around demand and product analysis, and diving into finding the right product assortment. (Read the transcript below and watch the accompanying video.)

The next key to rounding out marketplace success is making sure that you’ve got the most productive, A+ sellers working with you on listing the right products. So let’s focus on some considerations to think about when you’re recruiting power sellers to your marketplace.

Some of this may seem obvious, but I think it’s worth talking about because having quality sellers is critical to your success. And when we’re considering sellers, I kind of broke it down into four key elements that you want to think about. 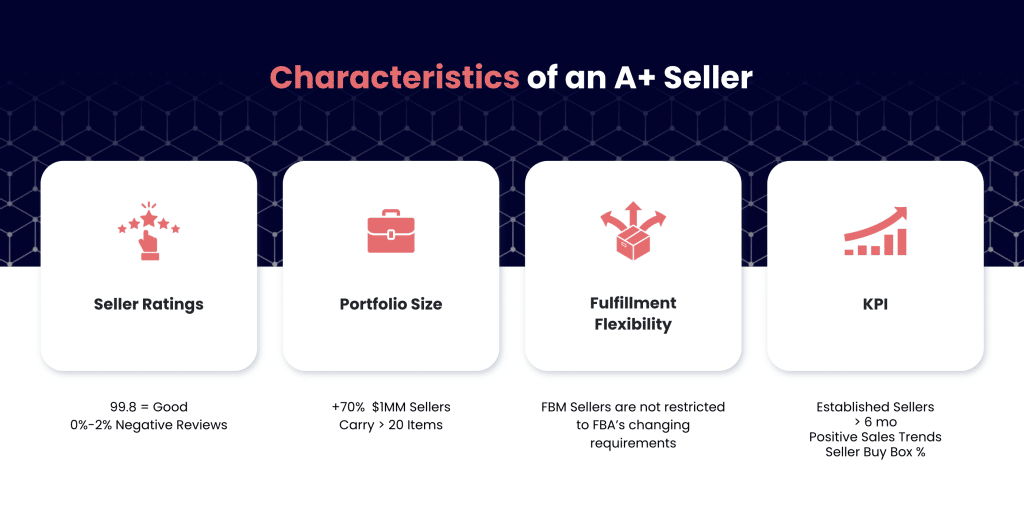 Four Characteristics of A+ Sellers: What to Look For

First off, look at seller ratings. Amazon has given us a track record for sellers. There’s a couple of metrics that they provide that do a pretty good job in scoring the sellers. One is the seller rating and the second is actually the buyer’s feedback.

And so I’m going to elaborate on each one of those. First of all, seller ratings: What the heck is it? You might have seen that everybody seems to have a rating of 99 or above. Well, that’s because it’s not based on a 100-point scale. What actually is occurring is that fractions of a 10th of a percent matter in that seller rating.

So if you look at that seller ratings, you’re going to want to try to isolate and find sellers that have a rating of 99.8 or greater, and contrasting with that, you could eliminate sellers with a 99.5 rating. They can be considered horrible. And it may really seem like splitting hairs here, but the reason is that, again, you want to look at that decimal point in comparing those sellers because it’s that fraction of a 10th of a percent that matters.

The way that Amazon is calculating this is that the feedback ratings are based off of the stars left in reviews. And so they kind of look at all five or four stars and consider those positive feedback and everything below four is considered neutral or negative feedback. And the calculation is basically they’re dividing the sum of the positive ratings by the sum of all the remaining ratings. And again, that’s why we’re talking about how small differences in percentages make a big difference.

So what the industry is kind of pinned on and identified, is that anything between zero and 2% negative feedback is considered great, anything greater than 5% could be a cause for concern and you might want to look at some other metrics around those sellers. So combining those two, 99.8 rating or better with less than 5% negative ratings is what you’re looking for. The second piece to consider is a seller’s portfolio size. The A+ sellers tend to have larger portfolios.

In fact, over 70% of million-dollar sellers have over 20 items in their catalog. You’re not going to want a seller with one or two items. They’re typically testing out whether or not they even want to get into eCommerce. You want to try to find sellers who are making this their business and are actively pursuing it.

One-third of million-dollar sellers, in fact, have over 250 items and they’re changing their mix regularly to make sure that they are relevant and have the right assortment to be able to meet market demand. So while you’re evaluating a seller, make sure they’re committed and active in their business indicated by a large number of items and a changing mix over time. These are the sellers that are also actively managing their portfolios and continuing to bring new products and new excitement to your marketplace.

Third, you’re going to want sellers who have fulfillment flexibility. This means trying to find sellers that are not FBA. These sellers have proven that they can deal with complexities of inventory management on their own and have the flexibility to pivot and deliver to their customers while having to deal with Amazon’s ever changing requirements.

So you don’t want to have them locked in and needing to send all of their inventory to Amazon to meet their requirements. Lastly, there are a couple of sales metrics and KPIs that you’re going to also want to consider. You’re going to want to find established sellers who have been in business for more than six months.

That’s because if they’ve made it to that six month mark, they’ve learned what works and what doesn’t work. They actively work their portfolios with social media, SEO, price monitoring, etc., in order to be a successful marketplace. And last, you should look for sellers with positive sales trends and a significant share of the Buy Box.

For example, we recently worked with a marketplace that was interested in adding paintball supplies to its portfolio. We did a seller analysis and what we found is that a large percentage of the market was supplied and serviced mainly by two sellers (over 50% of that marketplace). So if I’m trying to find the right seller, I’m going to look at those two first. But let’s dig down and take a closer look at those two sellers and kind of compare and see which one is going to be the best fit for the marketplace. 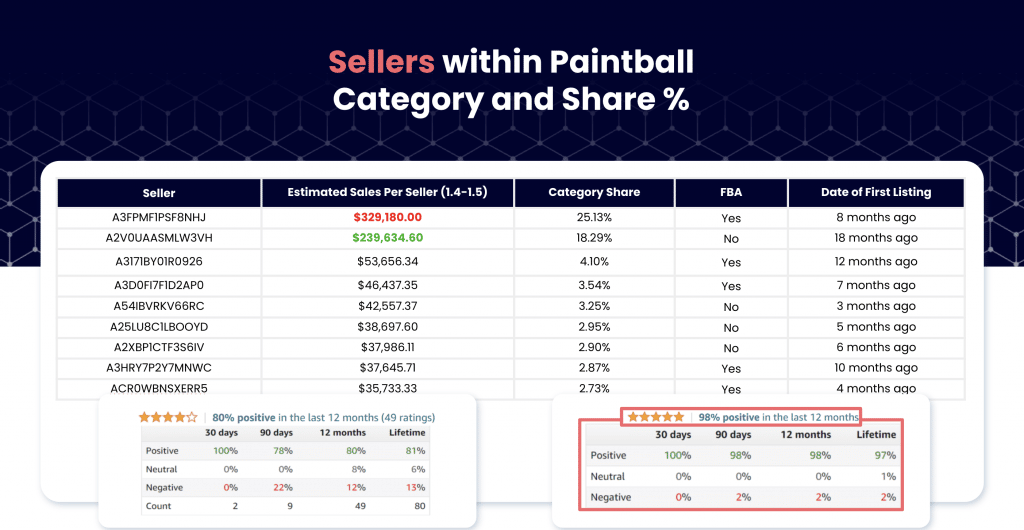 The first seller has a market share of 25% (the highest market share). It is selling over $330,000 in GMV, but it is actually trending down. They’re an FBA seller and they’ve been in business for about eight months. The second seller has a slightly lower category share and a lower GMV, but it is not an FBA seller and has been in business for over 18 months.

When you look at their different ratings, the second seller has much stronger positive ratings both recently and over the lifetime that it has been in business.

So when comparing two sellers and trying to recruit them to my marketplace, looking at the metrics, the sales, and the ratings makes it pretty clear that I would want to try to recruit the second seller rather than the first seller.

To summarize, there are four key elements to consider when comparing sellers on the marketplace: seller rating, portfolio size, fulfillment flexibility, and key KPIs like sales metrics. After you’ve established catalog integrity, promoted the most relevant products with the most informed, competitive pricing – and learned what might be missing from your mix of products that can accelerate growth, finding the right sellers are crucial to success. 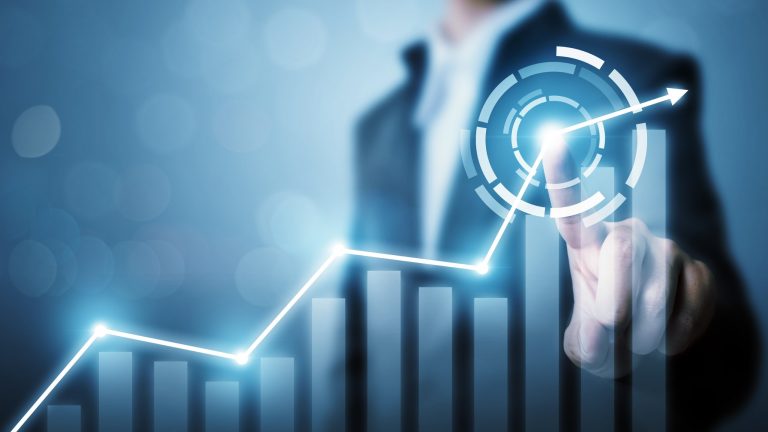 5 Ways Power Sellers Can Make Or Break Your eCommerce Marketplace 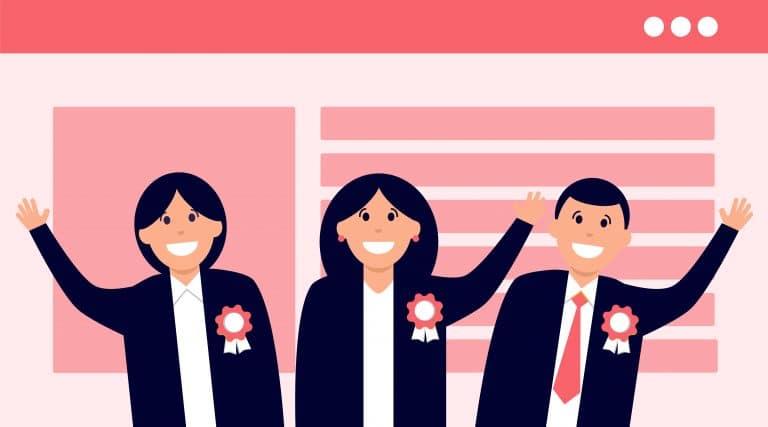 7 Tips To Recruit Power Sellers to Your Marketplace